Written by Jeremy E.
Updated over a week ago

This article will give a brief overview of SQL Server Always Encrypted Columns.

What are Always Encrypted Columns?

Always Encrypted columns are a special type of table column within SQL Server. They only store encrypted binary data, regardless of the actual datatype assigned to the column. They are particularly useful for protecting sensitive data such as passwords or personal user data as they ensure that the data is always encrypted within the database. Additionally, all encryption and decryption is handled by the client, which means, if properly done, the database engine on its own does not have sufficient information to read the data in those columns.

Due to being encrypted, Always Encrypted columns cannot be used as any part of a query other than the SELECT statement. The only exception to this rule is the ‘Deterministic’ encryption option, which allows for equality checks within other parts of the query, such as the WHERE clause (However, greater-than checks, less-then checks, or any SQL functions will still raise an error if used on those columns).

Which versions of SQL Support the Always Encrypted Columns?

CEK? CMK? What are all these keys?

SQL Server Always Encrypted columns use two layers of encryption. The CEKs (Column Encryption Keys) are used to encrypt the data in the columns. Then, the CMK (Column Master Key) is used to encrypt all CEKs. Only the encrypted version of the CEK is stored in SQL Server, which makes further encryption/decryption impossible without the CMK. The CMK is then installed on the server that will be accessing the encrypted columns, such as your website server. As long as your SQL client supports Always Encrypted Columns and has access to the CMK, it will be able to read/write to the encrypted columns.

How can I enable Always Encrypted Columns? 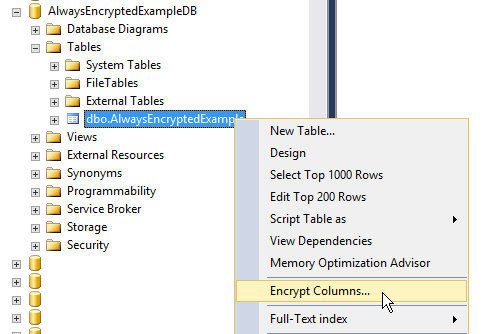 This will bring up the wizard for enabling encrypted columns. For each column, you will have to choose a couple options: 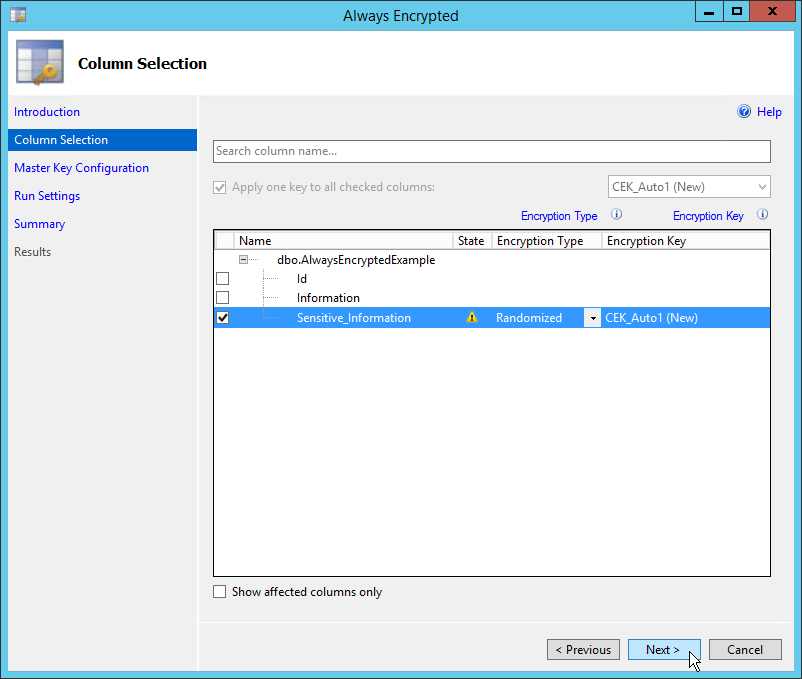 Deterministic encryption allows you to perform equality checks on the encrypted data. However, it also allows a potential attacker to infer information about encrypted data. For example, if you had a column containing two different roles, ‘user’ and ‘admin’, and you encrypted that column with the ‘Deterministic’ option, you could quickly tell that there were only two possible options just by looking at the encrypted binary values (even though you wouldn’t know what they were). And if you had a user named ‘Admin’ in the table, you could probably guess what role that user might be in.

Randomized encryption does not allow anything to be done with the data other than SELECT or UPDATE. However, all encrypted binary values in the table will be different. Given our example above, Randomized encryption would prevent someone from being able to see how many roles existed, which would make it difficult to guess who might be in which role.

Based on this, the most secure option is to always use ‘Randomized’ encryption unless you have an application requirement that needs ‘Deterministic’ encryption.

After choosing the columns, encryption types, and column encryption keys, you will be taken to the “Master Key Configuration” screen: 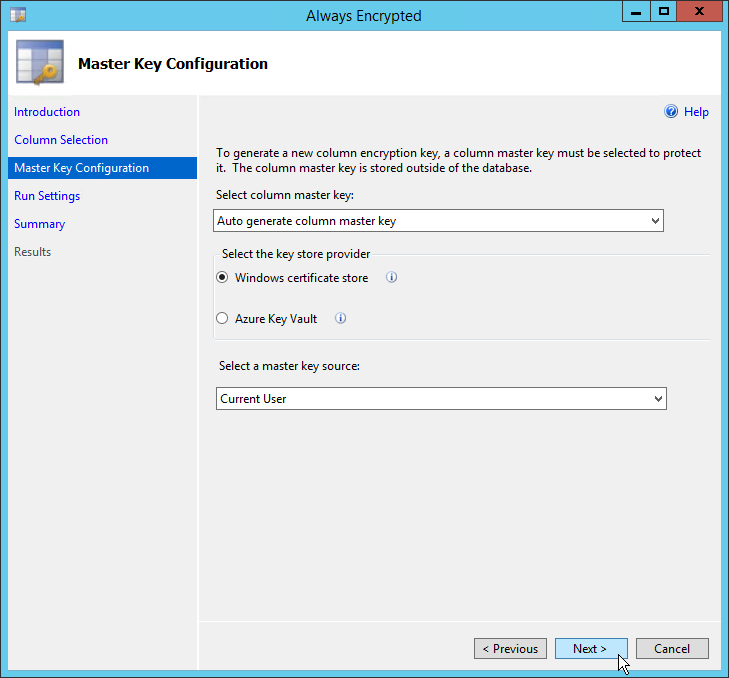 If you have an existing ‘Column Master Key’(if this is not the first time you have enabled always encrypted columns), you should choose it from the drop-down on this page.

The other option is related to whether you will store the ‘Column Master Key’ at the ‘User’ level or the ‘Machine’ level. Our recommendation is to choose ‘Local Machine’, as this allows you to install the key just one time per machine and manage which users have access to the key using permissions. If you do not see the ‘Local Machine’ option, you will need to re-open SQL Server Management Studio using the ‘Run as Administrator’ option in Windows.

Once you finish the rest of the pages and confirm the change, the columns in the database will be encrypted and your ‘Column Master Key’ will be placed in the certificate store on the computer where you are running SQL Server Management Studio. You can export the key by opening the certificate management console (Run -> certlm.msc).

Expand ‘Personal’ and choose ‘Certificates’. Then, right-click on the Always Encrypted certificate and select ‘All Tasks’ -> ‘Export…’. Within the export wizard, you will want to choose ‘Yes, export the private key’ on the second page.

Once the client application has access to the key, you must add the following connection string parameter to enable encrypted colums:

In order to use Always Encrypted Columns with ColdFusion, you must install the latest Microsoft JDBC driver for Java into the ColdFusion lib directory. Then, you must create the datasource in the ColdFusion administrator using the ‘Other’ option with the following parameters:

You must also ensure that the ColdFusion service account has access to the private key. This service usually runs under the ‘cfusion’ user so you will want to give read permissions for that user to the private key of the ‘Column Master Key’.