All Collections
General
Reasons to use LiteSpeed Web Server

Reasons to use LiteSpeed Web Server

Written by Paul Turner
Updated over a week ago

If you found your way to this article, then there is a good chance that your website(s) have been experiencing some performance issues, or maybe you just want to see what other options are available.

Before we get started, let’s explain what LiteSpeed Web Server is, as well as what other options are available.

What is a Web Server?

The web server is what responds to website request, such as HTTP:// and HTTPS:/ request. Without a web server, the web browser would not be able to complete the request and would essentially throw an error that the connection to the website could not be made.

A web server listens for this traffic and is configured to process different types of services like PHP, ColdFusion, ASP, .NET, etc.

There are many different options of web server platforms out there, which we’ll outline the most popular below:

For example, if you require a windows operating system then the default web server platform is Microsoft IIS. IIS has many features that are IIS specific, as well as it has built-in functionality with other Microsoft services such as Microsoft FTP services.

Apache, on the other hand, is the default web server platform that is installed on Linux CentOS systems running in a cPanel environment. While Apache is still receiving many updates it relies on older process-based approaches, which means that each time a new PHP request is initiated it has to spawn a new worker process. If you enable the PHP-FPM functionality for websites on the Apache configuration, then this can help a little with the performance of PHP processing, but doing so may require a large amount of RAM if you have a large number of websites on the server or a few traffic heavy websites.

Nginx is a web server platform that handles request much more efficiently than the process-based web servers and therefore is much better for performance than using IIS or Apache. It does come with the downside that it does not have as many features and functionality that you normally have with Apache or IIS, though. Nginx is generally used by large companies (such as Adobe, Cloudflare, Capital One, etc.) that have their own large IT department that constantly monitors and manages their web server and other systems.

LiteSpeed is a web server platform that has the efficiency and performance like Nginx (case studies show it has even better performance), but it also uses the Apache configuration to implement all the same features that are available within Apache. This brings the best of both worlds (performance and rich features) into one web server platform.

Below you can see a charge from a case study that displays the performance of each web server platform: 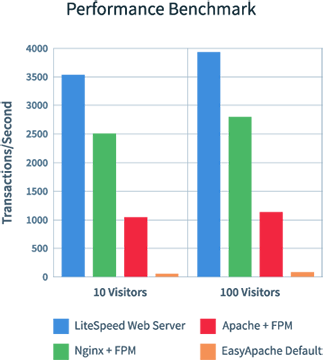 As you can see from the case studies in the above graph the LiteSpeed Web Server is much quicker for website processing and is our web server platform of choice.

We just went over how LiteSpeed Web Server can help your web server performance, which can increase your website load times by up to 9x. Let’s now dive into some of the LiteSpeed specific features that you can only get by using LiteSpeed as your web server platform:

You’re probably familiar with the term “caching”. LiteSpeed’s caching is not like other caching you normally hear of, as LiteSpeed utilizes server-level caching for your website rather than using PHP-level caching. Most WordPress, Joomla, Magento, and other CMS websites out there have some sort of caching plugin enabled.

The problem with the standard caching most websites due is this is PHP level caching, which is noticeably slower than the LS server caching that is performed when taking advantage of LSCache.

LiteSpeed has plugins available for most of the popular CMS applications including:

While the default LiteSpeed Web Server processing alone can and most likely will speed up your website performance, the LSCache options available have proven to speed up performance drastically for websites. Moreover, the more websites on your server that utilize LSCache, the more resources it frees up, which has a compounding effect for increasing performance even on websites that do not have LSCache enabled.

Very impressed with the service I’ve received, and in a meeting yesterday the CEO and others were amazed by how fast the pages resolved [with the WordPress Optimized Server]. Made me look great in front of a lot of important people!

We use LiteSpeed Web Server for all of our WordPress optimized server solutions, as this alone has a dramatic improvement on WordPress websites. The above quote is from one of our clients that made the switch from using a standard Apache web server to LiteSpeed. The result was incredible for their business and made our client look great in front of his team.

Apache uses a component called mod_php to initiate PHP based request, whereas LiteSpeed uses their custom LSAPI feature out of the box to speed up PHP request. Case studies show this to be about 50% faster than the Apache components.

Essentially, this built-in feature will help speed up new connections to your website.

Below is a list of commonly asked questions, details, and pricing related to LiteSpeed Web Server:

The quick answer is: Yes

In most cases, LiteSpeed reduces the amount of RAM (memory) utilized on the server as it handles initiating and closing PHP request much more efficiently than other web server platforms.

Due to several LiteSpeed features the length of those running PHP processes might be much shorter as well, which reduces resource usage time.

There are many factors that determine the overall usage, so this will depend on a case-by-case basis. The number of websites on a server, amount of traffic, LiteSpeed licensing type, etc. all play a factor into this.

What Does LiteSpeed Cost?

LiteSpeed has many different licensing types and as such we’ve provided a list of them below:

There are many different licensing types to meet the exact needs of each particular client.

Note: To clarify, if you have a server with 8GB RAM and your license type is ‘Site Owner’ or above, then LiteSpeed will act properly and use as much RAM as needed. However, if you have a license type that only allows 2GB RAM such as the ‘Starter’ license, and your server has more than 2GB of RAM, the license will not work. To work properly, your server MUST have the amount of RAM listed (or less) that matches the RAM amount in each license of the above list.

What is a "Worker Process?"

Is there any downtime during an upgrade?

If you already have an existing cPanel server environment running Apache, then we can easily upgrade you to LiteSpeed with Zero Downtime.

If you are using a different server environment, such as Windows utilizing IIS. Then we’ll need to create a new server running LiteSpeed and migrate your website(s) to the new server environment. Still, if done properly there should also be Zero Downtime during this process. In these cases our migration team would work with you on making this transition as easy and seamless as possible.

What Compression Options are Available?

LiteSpeed is built with both Gzip and Brotli compression enabled by default.

The compression feature allows you to save bandwidth by compressing the files sent to the client. At the same time, your website will be much quicker as the size of data the browser has to download is much smaller.

Brotli is a compression algorithm developed by Google. It is much faster than Gzip and features better compression. Brotli compression is enabled in LSWS by default.

If a browser does not yet provide support for Brotli, which most modern browsers do, then Gzip will be used instead until Brotli support is introduced to the client browser.

Is cPanel compatible with LiteSpeed?

Yes, cPanel officially supports the LiteSpeed web server. LiteSpeed essentially is just a drop-in replacement for Apache and can use the Apache configuration for additional features and configuration settings.

What programming applications work with LiteSpeed?

LiteSpeed officially supports PHP, Perl, Ruby, Python, and Java. Additionally, LiteSpeed has built-in exclusive features (LSAPI) that makes running PHP, Ruby, and Python much quicker than that of another web server platform, such as Apache.

Note: If you have any questions regarding LiteSpeed or wish to upgrade, then please contact our support team and we’ll work with you in getting your server’s performance in much better shape. We would love to answer any questions or help you get started with a WordPress Optimized solution as well, which runs on LiteSpeed.